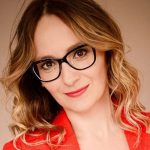 Biography:
Ivana Maric is political pundit from Bosnia and Herzegovina daring to criticizes government and opposition alike. She earned her Master᾿s Degree at the University of Sarajevo. Her field of interest is the impact of political propaganda on voting behavior. She has been holding lectures and consultations on elections campaign and public relations. Her analyses are published in media and she is often a TV commentator. She is also a social media influencer. Ivana works for the Konrad Adenauer Foundation since 1998. She is member of the Board of Directors of the Open Society Foundation in B&H.