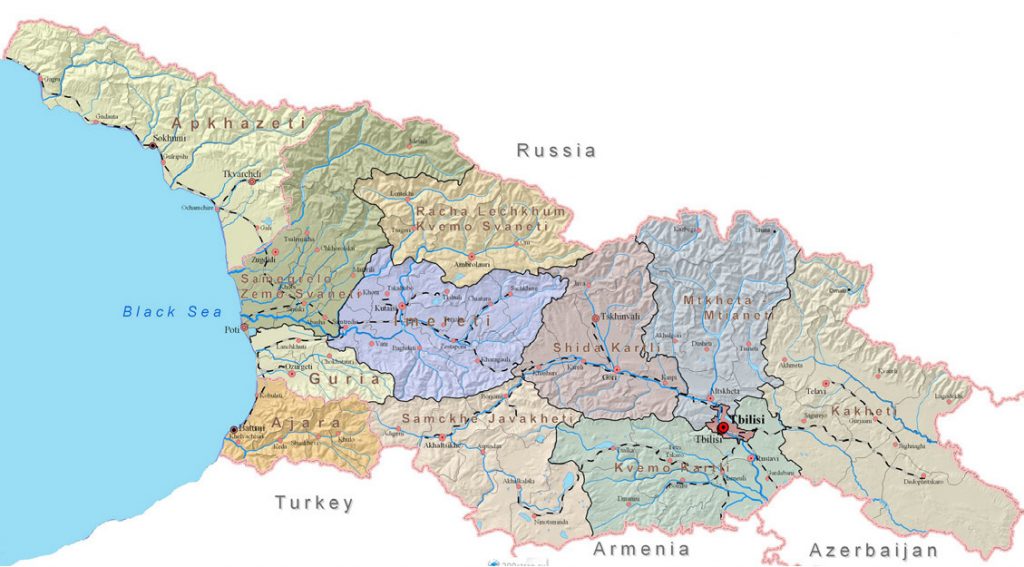 Some background about Georgia?
The Georgia country profile

Situated at the strategically important crossroads where Europe meets Asia, Georgia has a unique and ancient cultural heritage, and is famed for its traditions of hospitality and cuisine.

Over the centuries, Georgia was the object of rivalry between Persia, Turkey and Russia, before being eventually annexed by Russia in the 19th century.

Since emerging from the collapsing Soviet Union as an independent state in 1991, Georgia has again become the arena of conflicting interests.

Increasing US economic and political influence in the country has long been a source of concern for neighboring Russia, as have Georgia’s aspirations to join NATO and the EU.

Tense relations with Russia have been further exacerbated by Moscow’s support for the separatist regions of Abkhazia and South Ossetia, leading to a brief war in August 2008.

The Capital of Georgia is located in East Georgia, in “Tbilisi Cavernous”. It is lying on the banks of the Mtkvari (Kura) River 380- 600 meters above sea level. To the north Tbilisi bounded by south foot-fills of the Saguramo Range, to the east Iori plain’s northwest segment and to the west and south by various endings of the Trialeti Range.

The Capital is spread on 720 square kilometers. Main water artery is The Mtkvari River crossing the city from northwest to southeast. Floods are common during spring and early summer and rivers are shallow in winter. The Mtkvari River’s right tributaries are: Digmis-Ts- kali, Vere and Cavkisi-Tskali Rivers. Its left tributaries are: Gldani- skhevi and Lochini Rivers. The Mtkvati riverbed in Tbilisi fluctuates between 425m (in Digomi) and 370m (in Ortachala) above sea level. Beautiful Mtatsminda is 719m tall. Nutsubidze plateau is a highest residential settlement in Tbilisi located at 700m above sea level.

Mtskheta is a city in Mtskheta-Mtianeti province of Georgia. One of the oldest cities of Georgia and its former capital, it is located approximately 20 kilometres (12 miles) north of Tbilisi, at the confluence of the Mtkvari and Aragvi rivers. Currently a small provincial capital, for nearly a millennium until the 5th century AD, Mtskheta was large fortified city, a significant economical and political centre of the Kingdom of Iberia.

Fortress of Narikala in an old town of Tbilisi

Narikala is an ancient fortress overlooking Tbilisi, the capital of Georgia, and the Mtkvari River. The fortress consists of two walled sections on a steep hill between the sulphur baths and the botanical gardens of Tbilisi. On the lower court there is the recently restored St Nicholas church. Newly built in 1996–1997, it replaces the original 13th-century church that was destroyed in a fire. The new church is of “prescribed cross” type, having doors on three sides. The internal part of the church is decorated with the frescos showing scenes both from the Bible and history of Georgia. The structure was established in the 4th century as a Sasanian citadel called Shuristsikhe (i.e., “Invidious Fort”). It was considerably expanded by the Umayyads in the 7th century and later, by king David the Builder (1089–1125). The Mongols renamed it “Narin Qala” (i.e., “Little Fortress”). Most of extant fortifications date from the 16th and 17th centuries. In 1827, parts of the fortress were damaged by an earthquake and demolished.

Georgia is considered to be the homeland of winemaking. It is here that wine was first made 8,000 years ago and locals still use the ancient technique of vilification.
Apart of the famous orange wine, you should also consider tasting Chacha – grape spirit with 40% alcohol concentration, and the craft beer of mountainous Georgia.

WARNING: you will gain weight in Georgia! It is impossible to resist bread baked in huge clay ovens, boat shaped cheese-bread, eggplants with nuts, or large juicy dumplings. Don’t bother remembering the names of the dishes. There are too many and all are yummy. Besides the delicate cuisine, the fruit and vegetables
that you can buy in any local market are mouthwatering as well. We’ve seen tourists carrying strawberries, peaches, and tomatoes instead of souvenirs, so food is definitely among the top 10 reasons to visit Georgia.

One of the main reasons to visit Georgia is that our tiny country is full of surprises. Travelers can discover breathtaking sights untouched by humans, abandoned build ings, and gateway options. At the same time there are plenty of private parties and Supras (fests led by the toastmaster where you can listen to amazing local stories and try the famous food and wine from the family kitchen) where the guest is always welcome.

During the turbulent Georgian history, our people were influenced by a mix of European and Asian cultures. Georgia is now a country of diversities, a country of amazing polyphonic songs, stunning dances, and rebellious art. We are proud of our unique alphabet, we boast with sports achievements, and recently have become proud of our input in the fashion industry. Conservative and modern at the same time, Georgia has always been a controversial but tolerant country.