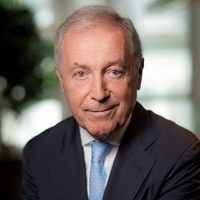 Aloys Hirzel is co-founder of Hirzel.Neef.Schmid.Councelors, a leading communications strategy consultancy organized as a law firm. The partnership-led firm is primarily active in the development of communications strategies, issue management, political communications consulting, and the support of M&A and capital market transactions for national and international companies and institutions. The company with offices in Zurich, Berne and Geneva is owned by the currently ten partners.

After an education in typography and journalism, Aloys Hirzel started as a journalist writing for various large daily newspapers and was editor-in-chief of what was then the largest Swiss consumer magazine. In 1970, he became the first head of corporate communications for the international Mövenpick Group and, after working in the PR department of Holiday Inns in the U.S., he became an independent PR consultant in 1976.

In 1980, together with two partners, he founded Trimedia Communications, which under his leadership became the largest and only internationally active Swiss communications consultancy with offices in all the world’s major financial centers. In 1996, he sold his shares and developed the concept of a communications consultancy managed according to advocacy principles, which he founded in 1997 together with Jörg Neef and Victor Schmid.  Today, Aloys Hirzel is a senior counselor to the company. He also lectures at universities and business schools.