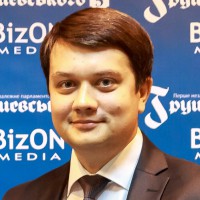 Biography:
Dmytro Razumkov is the co-founder and director of The Ukrainian Politconsulting Group. He is a political strategist and political analyst.

He is working in political consulting sphere since 2006. He took part in local and regional election campaigns, was a consultant of candidates to Verkhovna Rada people’s deputies and Authorized Representative of the candidate to the President of Ukraine.

He has been occupying managerial positions in private and public sectors and political parties.

Dmytro Razumkov specializes in informational and analytical work in the sphere of domestic and foreign policy of the state, as well as adaptation and implementation of political technologies for the realization of strategies for formation of public opinion and image.